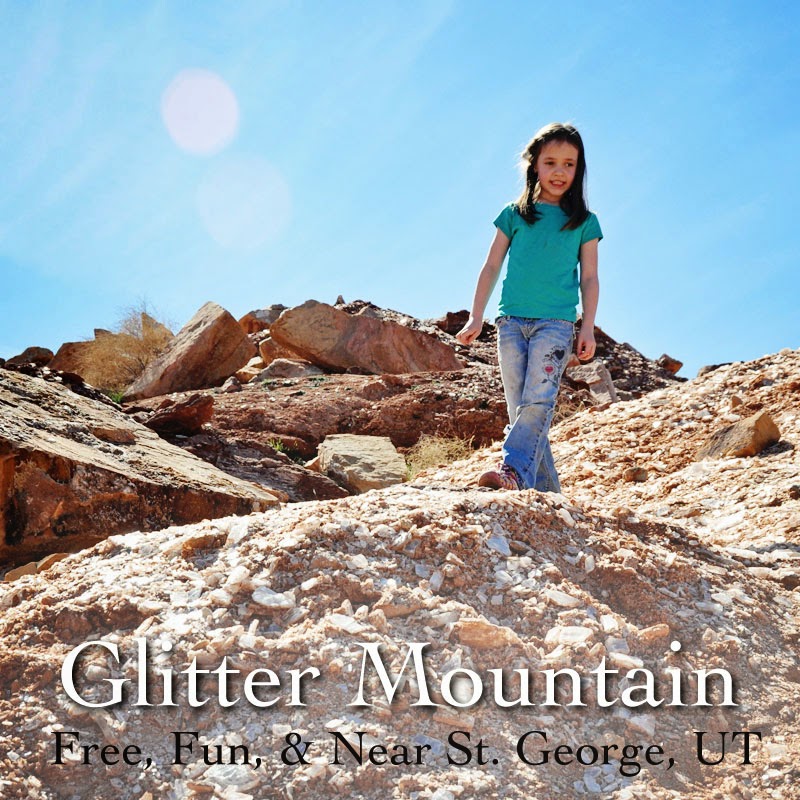 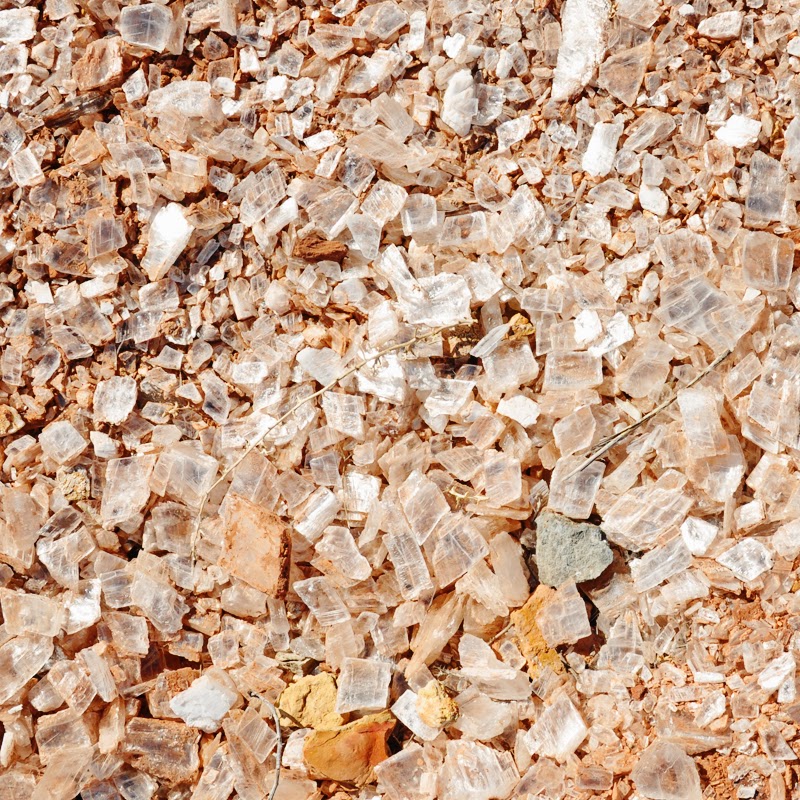 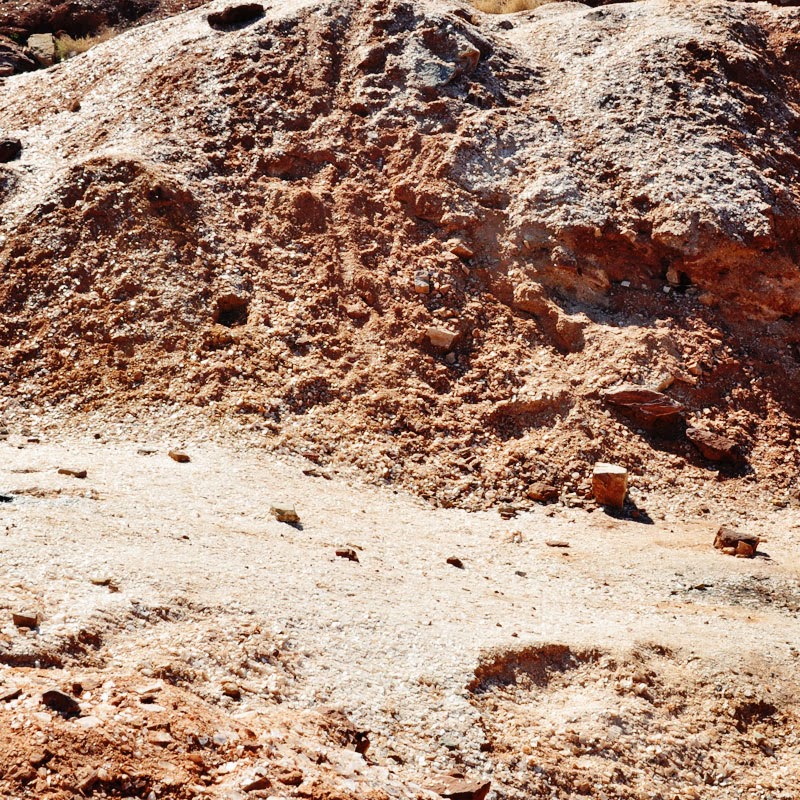 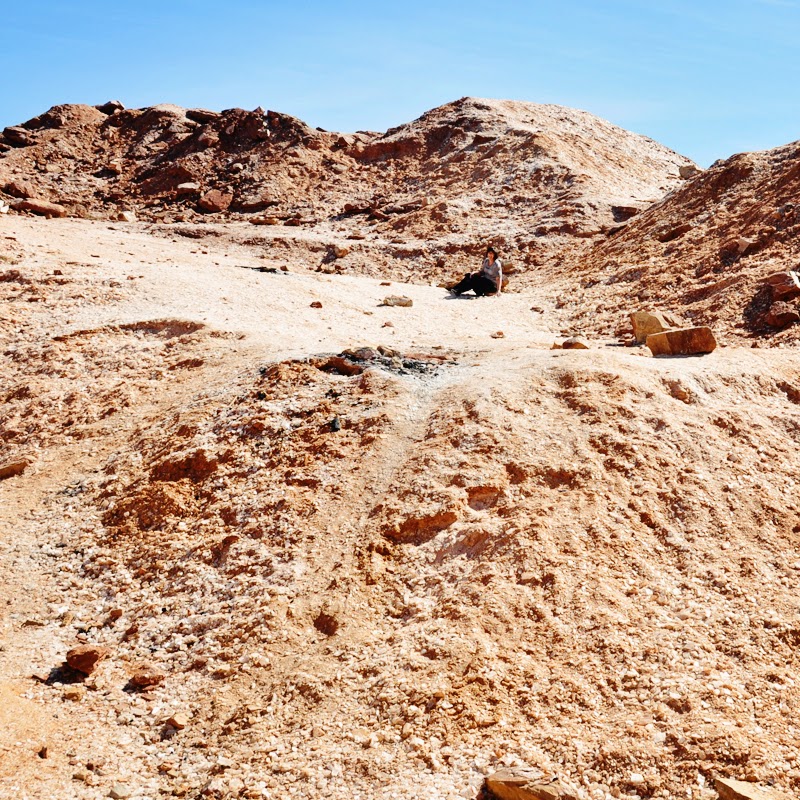 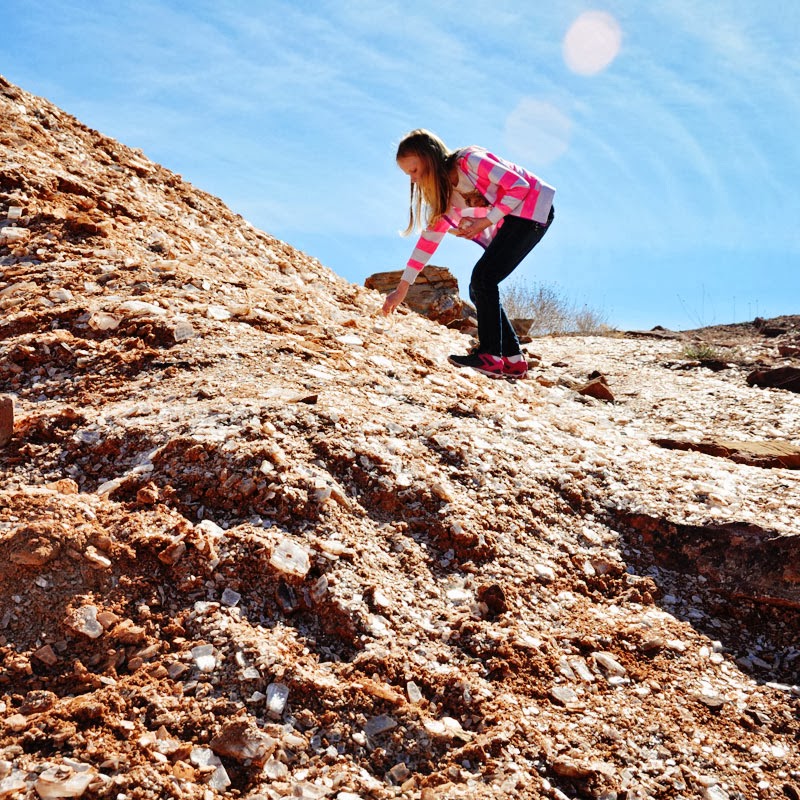 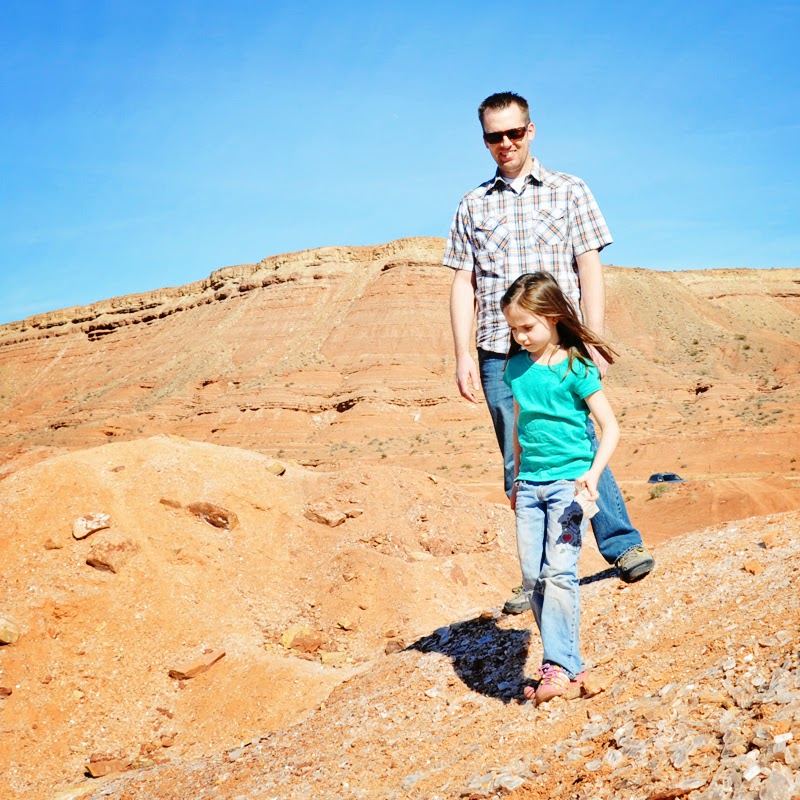 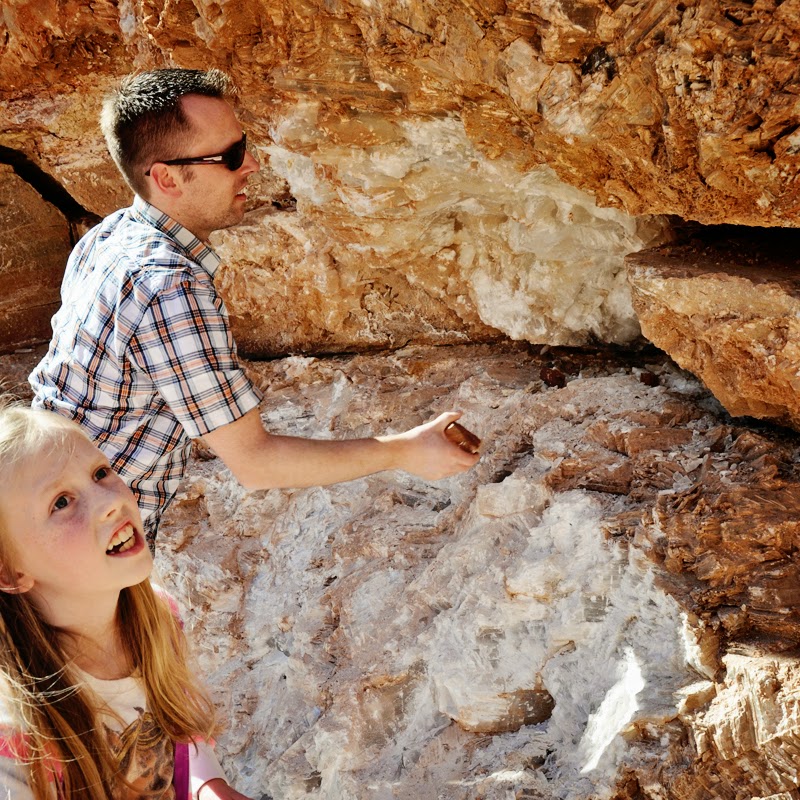 These photos do not do Glitter Mountain justice. This place is only about 10 miles from St. George, Utah. If you are looking for something fun and free for the whole family to do while you are in St. George, you have to find Glitter Mountain. My kids like to call it Sparkle Mountain. We all had so much fun here.

Glitter Mountain is an old Mica Rock mine in Arizona, about one mile from the Utah State line.

You can chip away Mica near the bottom of the pit, or choose a piece of glittery rock from the thousands that are scattered on the ground surrounding the mountain.

This is a great place to go in the winter. The temperature was only 55 degrees, but it felt much warmer with all the rocks reflecting the sun. I can't imagine how hot this would feel in the summer. Be sure to bring water with you.

The directions we found online to get to the mountain required 4 wheel drive. On our way home however, we found a much faster and easier way.

Here's how to find Glitter Mountain:

(Traveling in a Minivan directions)
• Find Telegraph Road in Washington, UT
• Turn south onto Washington Feilds Road
• Keep driving south on Washington Feilds road.
• After a while you will go under the Southern Parkway road.
• Soon the pavement will end.
• Take the first right onto a nameless dirt road heading South.
• Drive about 10 miles, until you will reach some houses at the Utah/Arizona border, do NOT turn down this street, keep going straight.
• Drive about 1.5 miles. Soon you will see the glittery white mountain to your right.

If you are looking for more advendure, and you have a 4 wheel drive vehicle, follow these directions:
(Check the weather to make sure there is no rain in the forecast.)
• Take I-15 South to Southern Parkway
• Travel East on Southern Parkway. After 3 miles take the River Road exit.
• After crossing the AZ/UT state line, look for a sign to your left that says: Little Black Mountain Petroglyphs.
• Go about 3 miles, you will see a bathroom and the Petroglyph site.
• Continue East on the dirt road.
• About 2 miles, you will sees some houses and a sign that reads, St. George 10 niles.
• Turn right at the sign.
• Drive about 1.5 miles. Soon you will see the glittery white mountain to your right.

Be sure to pin these directions on your Vacation board on Pinterest.

The Bright side of Death 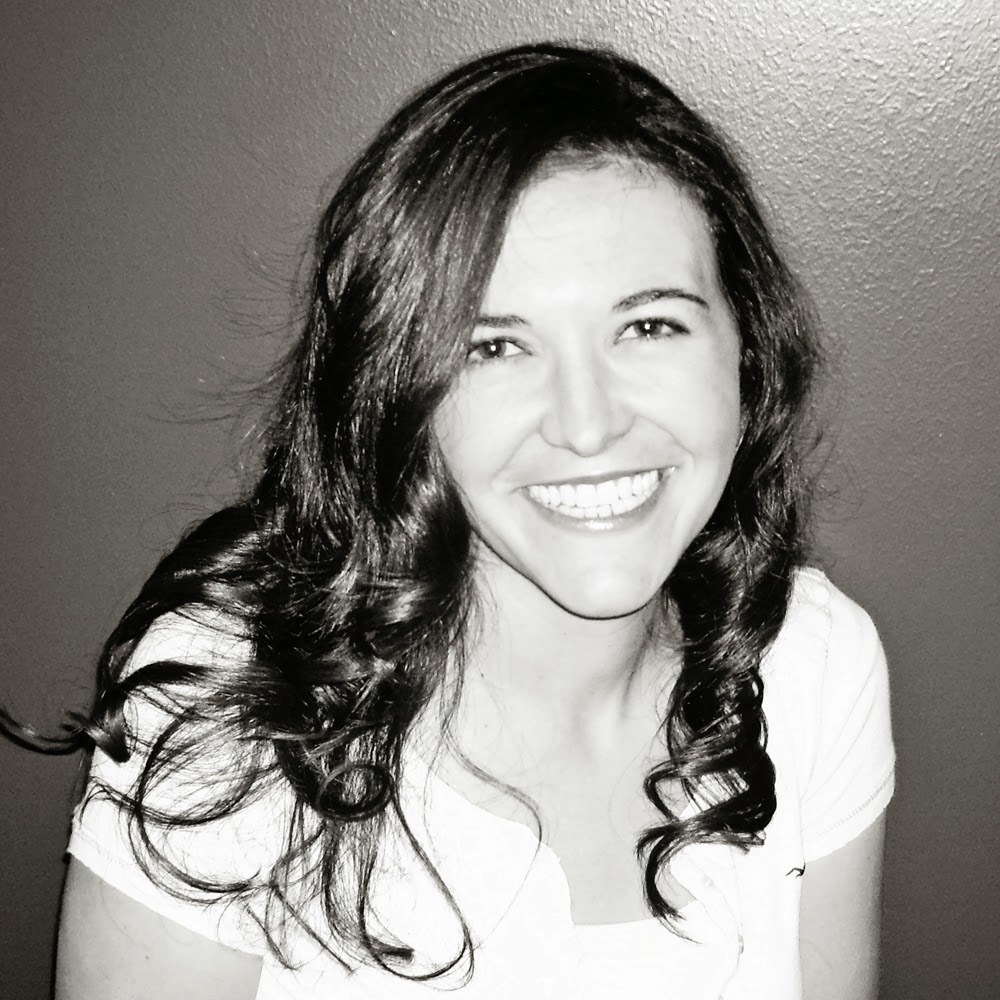 One year ago today, I lost my little sister.
As I left the hospital that day, I worried about how I would tell my kids they had lost their aunt. Not just an aunt, more like a second mom. She had been living across the street from us the previous 2 years and my kids were constantly over at her house.

It was hard to see my kids so sad after loosing someone who was such a big part of our lives. They cried, asked when they could go see her, and wanted to invite her to their birthday parties.

I too, felt a whole lot sadder than I had imagined I would. She was always helping me with my kids and work projects. Plus, I could always count on her to be there when I was feeling lonely.

One day, my youngest daughter came home from pre-school, and announced happily that she was the luckiest kid in her whole class. After asking her to explain what she meant by that, she told me that she was the only kid who had an aunt who was a REAL angel. Since that day, she has mentioned several times about how lucky she is to have a real angel that watches over her. I'm not sure who put the idea of my sister being her angel into her head, but she is very happy about the idea. And it really seems to give her joy.

I wanted to be happy like her. I decided that if my young daughter could look on the bright side of her aunts death, then I too could try and look a the bright side.

To help, I decided to make a list a list of things that my sister taught me through her struggles and eventual death.

1) Charity. My sister was sick for a very long time. I was able to see all the acts of Charity that others performed for her. I've never seen so much kindness. Strangers donating in her behalf. An entire neighborhood & family rallying for her & helping her earn money for her treatment. Neighbors bringing dinners and comfort to my mom. In return, it's helped me to have a different, more charitable view towards tough situations.

2) Sympathy. Although I've previously lost Grandparents and friends, I now know what It's like to loose someone you are very close to, who is far too young to die. I can more easily sympathize with and relate to others who are facing similar tragedies.

3) Health. When my sister found out that she had Cancer, and that sugar fed cancer, she stopped eating sugar that very day. As she learned more about Cancer & health she adopted a very strict and healthy diet. It was hard for her to follow at times, but she did it without cheating. Near the end of her life she got pneumonia due to the damage that the Chemo had caused to her body. When she was admitted to the hospital, the staff tested her blood. They were surprised to see how healthy it was. I know that her healthy eating habits prolonged her life much longer than she should have lived due to the severity and type of cancer she had. I'm thankful for all the healthy tips she taught me while she was sick.

4) Gratitude. My sister taught me how to have gratitude in tough situations. A year ago, my sister had lost her hair. She couldn't walk. She couldn't even talk. She was dying. Everything was hard for her. Despite her hardships, she was grateful for so many things in her life. She spoke of her gratefulness often. If she can show gratitude in such sad circumstances, I can learn to show it in my own, much easier circumstances.

6) Kindness. In one of the recovery centers my sister stayed at, some of the nurses were annoyed with her. In their defense, my sister did need a lot of help, more so than other patients. Since my sister wasn't able to do anything herself, she relied on the staff for everything. I know it was hard for her to have to rely on them for so much. She used to be so independent. She used to be the one who was always helping everyone. A few of the nurses were very rough with her. They hurt her, neglected her, ignored her, and sneered when they walked past her room. Once, when I was up spending the day with her, I noticed that she had not been fed all day. It was almost dinner time and I had spent hours trying to get a nurse to come put some food into her feeding tube. Despite her discomfort, and despite the fact that she could barely talk she thanked the nurse who had neglected her all day. She made sure, not only to thank each and every staff member that helped her (weather they were rude to her or not.) She asked them about their family members and showed unbelievable kindness to them.

I'm so thankful and I feel so blessed every time I think about all the lessons my sister taught me over the past 3 years. 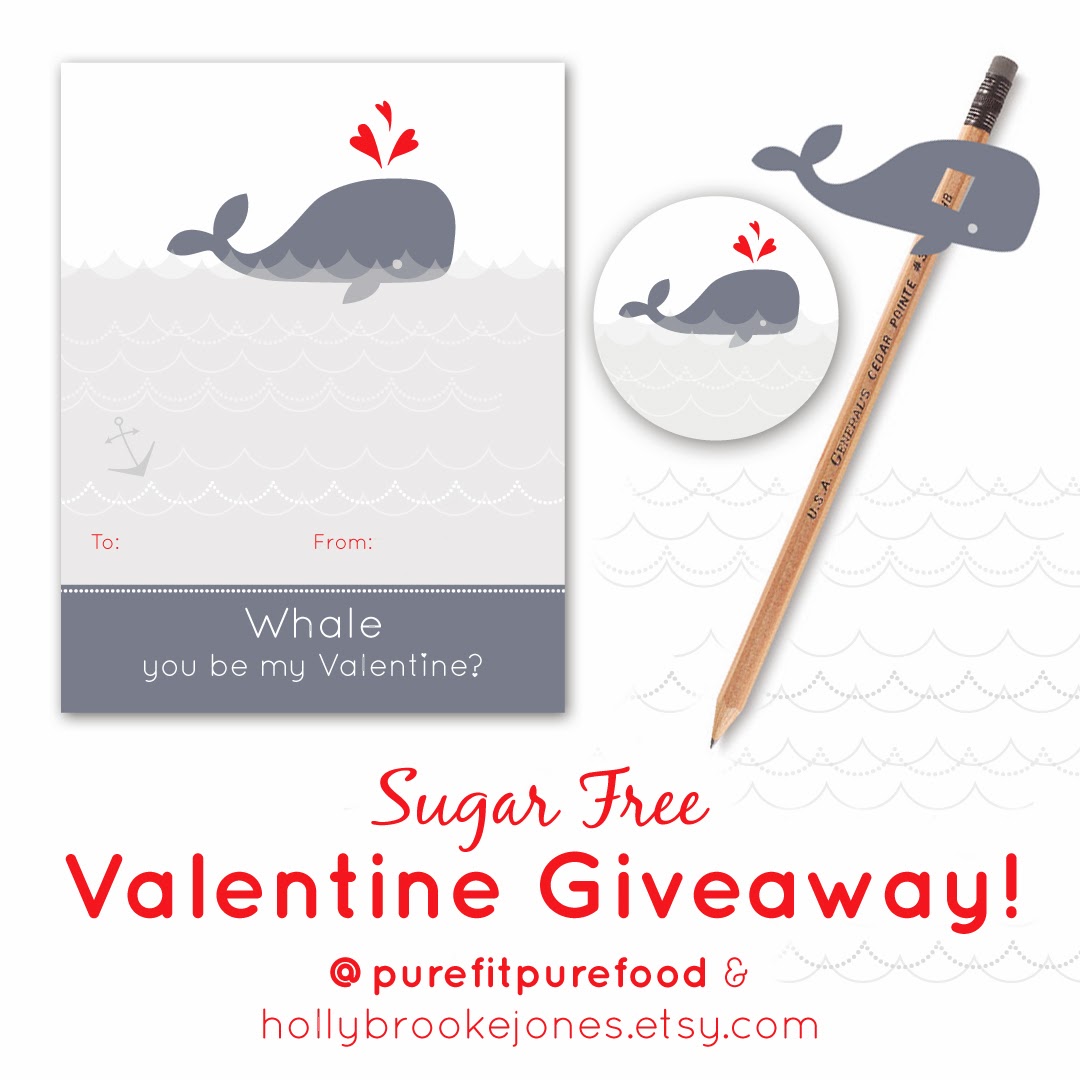 If you're like me, you eat way too much candy & treats. My friends over at @purefitpurefood are doing a challenge for a Sugar Free February. To help them kick off the month, I'm doing a free (Sugar Free) Valentine printable giveaway to a winner on their Instagram feed.
To enter, just follow them at @purefitpurefood on Instagram, and tag your friend on their feed.
They will pick a winner (or maybe a few) on Monday, February 3rd.

Plus, you're going to want to follow them! Devrie (MS,RD) is a Dietitian & has yummy healthy food tips. Brecke (NASM) is a trainer and posts videos of excellent workout routines & tips.

My ebook on itunes

My stuff on Society 6 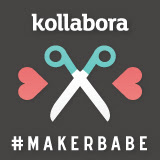